My kids scratched their heads at this video because there’s a kid from the “Soviet Union.” Where was that again? It’s hard to believe not too long ago there WAS a Soviet Union and no such things as the internet or smart phones. The world has changed so much since “Captain Planet” was on TV but it’s message of protecting the earth and working together stay the same.

Captain Planet and the Planeteers is getting a huge revival right now and I hear there is even a live-action movie in development. You can find out about the Planeteer Movement at http://captainplanet.me/  and on Facebook.

The Power is Yours GIVEAWAY!

Share your thoughts on “Captain Planet” and how best to protect the environment and you could win these two great prizes: Captain Planet and the Planeteers Season One DVD signed by series co-creator Barbara Pyle and a limited edition Planeteer ring of your choice.* (The Power is Yours!)  A winner will be chosen at random.

Then on Sunday, February 19th, from 3:00–4:00 PST, join a Twitter party co-hosted by the Cap and Barbara as they celebrate Captain Planet reaching half a million fans on Facebook!  Follow #Planeteers and you could win even more great prizes!  *Size and color subject to availability. 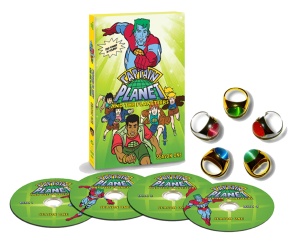 19 Replies to “The Return of Captain Planet”

This site uses Akismet to reduce spam. Learn how your comment data is processed.